Anirban Bhattacharya (Bengali: অনির্বাণ ভট্টাচার্য) is an Indian Bengali stage and film actor. He played lead roles in many popular theatre productions. His first successful theatre production was Debi Sarpamasta, written by Manoj Mitra, directed by Debesh Chattopadhyay. His other notable works are Anthony Soudamini, Nagamandala (famous play by Girish Karnad), Jara Agun Lagay, Bisorjan, FM Mahanagar, Karu Basana, Awdyo Shesh Rajani, Athoi etc. In 2017, he got the Mahindra Excellence in Theatre Awards (META) as Best Actor in a Leading Role (Male) for Awdyo Shesh Rajani.[6] In 2015, he started his film career with the Zee Bangla telefim Kader Kuler Bou. He got fame for his character as Bishan Roy from the film Eagoler Chokh.[7] For playing this role, he picked up the Filmfare Awards East for Best Actor in a Supporting Role in 2017. In 2019, He got his first Best Actor Award for the role of Nikhilesh Chowdhury from the movie Ghawre Bairey Aaj which was immensely praised by critics and audiences. 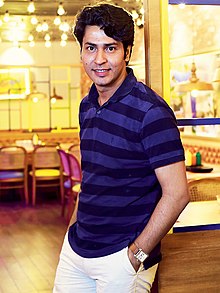